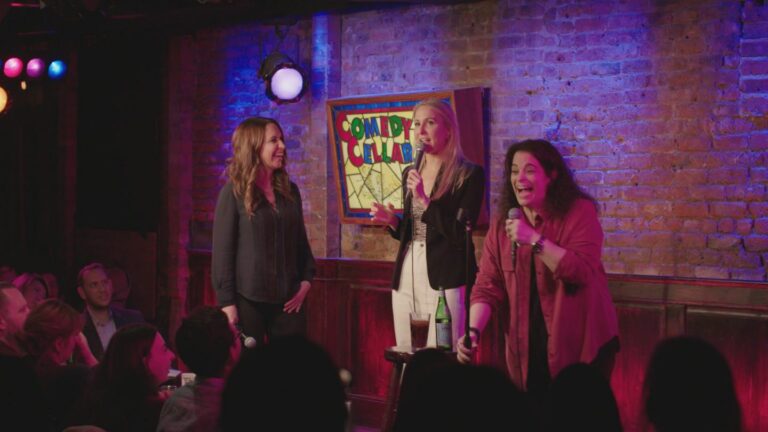 After a last-minute cancellation in 2020 due to the COVID-19 pandemic, SXSW — Austin’s annual celebration of film, music, comedy and interactive media — is going virtual for its 2021 edition. One of the highlights of this year’s film lineup is Hysterical, a hilarious and insightful documentary about women navigating the historically male-dominated world of standup comedy. Directed by Andrea Nevins, the film is slated to premiere at SXSW 2021 en route to an April release via FX Networks.

“There are so many incredible female comedians out there,” executive producer Jessica Kirson told us via email. A comic with more than two decades of experience, Kirson wanted to ensure the documentary explored the camaraderie between female performers. “We are very close and we support each other fully. A lot of people probably don’t know that. I’m glad that we show that in the film.”

“Fun and positive relationships amongst women exist!” echoes Marina Franklin, another performer featured in Hysterical who answered some of our questions via email. “There are more women in the comedy scene than ever, and they too hang out, go on the road, and support each other. We pit women against each other so often for the sake of entertainment, and that narrative needs to change. We need to garner positive images of female comedian relationships so the younger generation can follow suit.”

The film boasts an eclectic selection of female comedians, from legendary names like Margaret Cho, Lisa Lampanelli and Kathy Griffin to the rising stars like Kelly Bachman, Nikki Glaser and Iliza Shlesinger. “We wanted to get a wide range of different styles,” said Kirson, noting that they “included as many amazing comics as we could,” but some women they had hoped to feature weren’t able to participate due to scheduling conflicts.

Standup comedians have often been willing to explore deeply personal issues as part of their craft, and Hysterical includes a particularly moving segment where Franklin, having recently been diagnosed with a serious illness, attempts to work through her feelings onstage in front of an audience. “I wasn’t sure if I could make it funny,” she said, explaining that her emotions were raw and she was concerned the subject matter might be a bit too heavy for audiences to absorb. “I had a mentor explain to me that those feelings were good to explore on stage, and if I wait too long the truth may not be there later.”

Franklin decided to try things out in a smaller venue, “where the stakes were not high,” and the response — captured in the film — was overwhelmingly positive. “I felt that my material had a purpose for the first time, to make people laugh while raising awareness.” That doesn’t mean Franklin didn’t experience some awkward moments, but she notes “that’s all part of the process of building stronger material,” and ultimately opening herself up and getting so candid became therapeutic.

Kirson hopes these sort of personal stories will help Hysterical resonate with audiences. “Female comics are strong, determined, and hilarious,” she said. “We have worked so hard to get where we are. There have been many obstacles, but we are warriors and we have still risen to the top.” But she also hopes the film will put to rest a persistent prejudice in the comedy world. “I want people to get that thought that ‘women aren’t funny’ out of their minds. It’s simply not true.”

“The future of comedy is female,” agreed Franklin. “So stop saying, ‘I never thought women were funny, but you are!’ It’s not a compliment, and apparently not true, cause we’ve all heard it. Every female comic shits on the person who says that.”

Hysterical premieres on Tuesday, March 16th as part of the SXSW Online lineup, followed by a release on April 2nd, exclusively on FX. Find more of our SXSW 2021 coverage at this link.