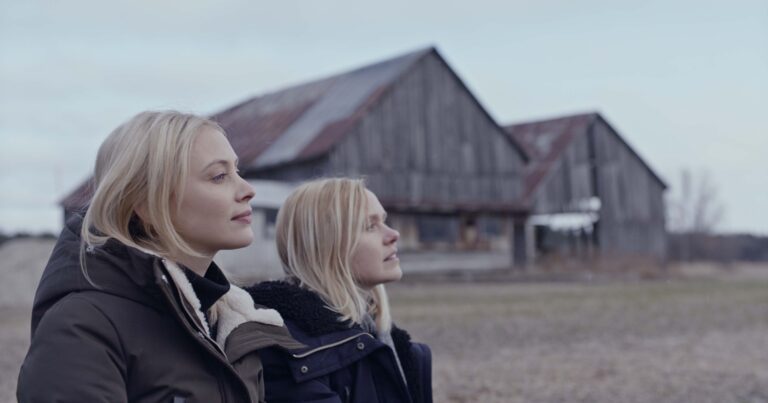 “I think without humor, I would die,” says Alison Pill. “And that’s not hyperbolic.”

It’s the morning after her latest film, All My Puny Sorrows, premiered at the 2021 Toronto International Film Festival. Adapted from the novel by Miriam Toews, it follows two sisters — struggling writer Yoli (Pill) and world-renowned concert pianist Elfrida (Sarah Gadon) — who reconnect after the latter attempts to take her own life. On the page, it sounds like a pretty somber premise, but director Michael McGowan balances the weighty subject matter with a healthy dose of gallows humor, a quality which caught Pill’s attention right from the start.

“I think about the moments in my life that are so full of grief, that if you only felt the grief, it would just be too much,” she says. “Luckily, the universe will also provide you a glimpse, even just a sliver, of something that if you can just grab onto and laugh at it, you’ll find your way through.”

“Life isn’t just sad,” she continues, while readily acknowledging that grief — and even existence itself — can often feel overwhelming. But shared humor is a palpable remedy, one that can forge the strongest of connections. “To be able to find those moments and enjoy those moments with every ounce of your being, that’s enough to be able to keep you afloat sometimes.”

Adapted by McGowan himself from Toews’ novel, the screenplay struck an immediate chord with Pill, who jokes that even reading it through to the end marked it as “better than most of them.” But the quality of the writing and the dialogue, combined with the inimitable nature of Yoli’s character, was something that particularly resonated, and Pill felt it was the sort of opportunity that doesn’t come around often. “It’s very hard to make art, and it’s even harder to make good art,” she says. “This was a beautiful chance.”

Not that she didn’t have a bit of apprehension about the project, chiefly the notion that her character would narrate a significant portion of the film. “When I’m reading a screenplay and see voiceover, I’m like ‘oh fuck,'” she says with a laugh.

Another hurdle was the tight shooting schedule — only 20 days — and the fact that McGowan hadn’t envisioned any rehearsal time prior to the start of production. But Pill, who learned the value of preparation when she began doing theater, was willing to carve out her own time if necessary. “There’s a real freedom that comes in having your lines in your bones,” she says, while also admitting her desire for extensive rehearsal came from a place of practicality.

“It was sort of a selfish thing,” she jokes. “I have a four-year-old kid, so when I get home after a full day of work I’m not going to have a ton of time to look at lines.”

All My Puny Sorrows forces its characters, and the audience, to confront some uncomfortable truths about mental illness and whether or not unhappy people are obligated to continue living. “I think there’s an interesting discussion of selfishness when it comes to suicide,” she says, noting that people who take their own life are often labeled as selfish. “But there’s something also incredibly selfish about needing that person to stay alive.”

At one point during the film, Elfrida pleads with Yoli to take her to a clinic in Switzerland, where suicide is legal and she doesn’t have to die alone. The very notion that Elfrida should need to consider such an extreme measure is something that Pill finds troublesome. “How are we supposed to criminalize suicide?” she asks. “How is that helpful? I think decriminalizing most behaviors that we find uncomfortable is probably for the best.”

It’s a complicated topic, and one likely to invite passionate responses from both sides of the fence. Pill doesn’t claim to have the answers, but she recognizes that society at large seems to be more open to discussion about suicide and mental illness, which she points to as a sign of progress.

“Existential dread is part of the human experience, as far as I know,” she says. “As painful as this all is, and as painful as depression can be, it’s something we must look at, and not ignore and shove out of the way. I think facing anything with curiosity instead of judgment is the better way to go.”

All My Puny Sorrows screened at the 2021 Toronto International Film Festival. Find more of our TIFF 2021 coverage at this link.