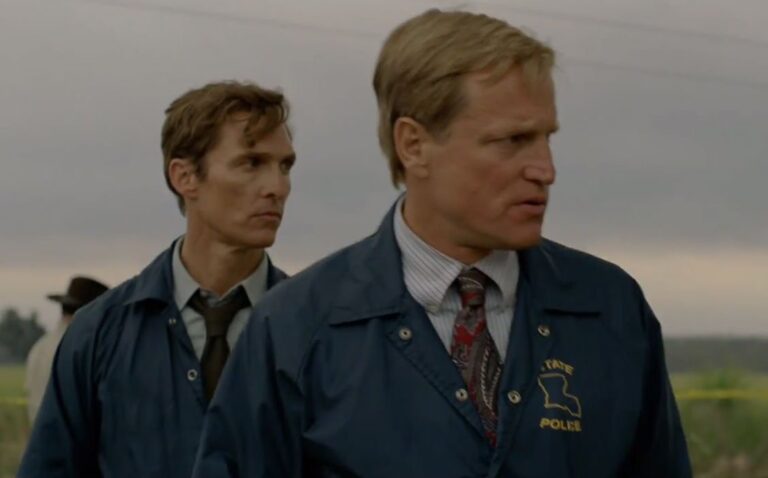 HBO is back to doing what they do best: redefining the bar for television quality. True Detective is their latest original series and if the debut episode The Long Bright Dark is any indication, we’re in for a very macabre and captivating ride.

The show centers on its A-List co-stars Matthew McConaughey as Rustin Cohle and Woody Harrelson as Martin Hart, both detectives trying to bring down a serial killer with a flair for the twisted and dramatic over a seventeen year period. True Detective will be an anthology series (rotating cast and story each season), so we’ll only get these two leading men for the first season and that’s a damn shame, because McConaughey and Harrelson are so, so good in this show.

The Long Bright Dark doesn’t waste any time diving the audience into its bleak, dark Louisiana murder mystery with a body discovery that will instantly feel akin to something that would take place on NBC’s Hannibal. The detective duo of Cohle and Hart frame the narrative of the episode with future versions of themselves in 2012, separately telling the story of this developing case back in 1995.

Cohle is quite possibly this television season’s most detached and bleak character, so much so that at times I almost laughed at his horribly dark notions, as if I was watching a Debbie Downer SNL sketch. Bad at parties, indeed. McConaughey appropriately still has his Dallas Buyer’s Club skinny body frame, adding to the overall disturbed nature Cohle embodies. Hart, on the other hand, is your classic good-natured southerner who is trying to get through to Cohle, but is exasperated by how far gone his humanity seems. This scenario actually makes for some of the few mildly humorous lines in an otherwise soul-suckingly somber episode.

The supporting cast is definitely designated to a “supporting” role with very little character development given to anyone. Michelle Monaghan gets the most screen time as the stereotypical “good cop’s wife” Maggie Hart, who already seems to wear on the viewers’ nerves. But I do look forward to seeing more of Tory Kittles and Michael Potts in the roles of the detectives interviewing the 2012 versions of Rust and Martin.

As a debut episode, The Long Bright Dark exquisitely sets up the plot, its characters and the dark road ahead for its “heroes” if you can call them that. The writing is bold and ballsy, the acting is Emmy-worthy, with only the murder itself feeling a bit “been there done that.” True Detective is going to mesmerize audiences and The Long Bright Dark will make them uneasy, on the edge of their seat, and tuning in next week.

Wow, McConaughey’s career is on fire. He’s amazing here. Harrelson…also amazing. The earnest heart behind Martin and the sheer darkness behind Rust. The car conversations. The murderer’s sketch. 2012 Rust. The episode’s final line.

Man, is this show dark. I mean really dark. This is not “fun” television. The murder in this episode feels recycled from other recent shows. Martin’s wife could be the next Skyler from Breaking Bad.