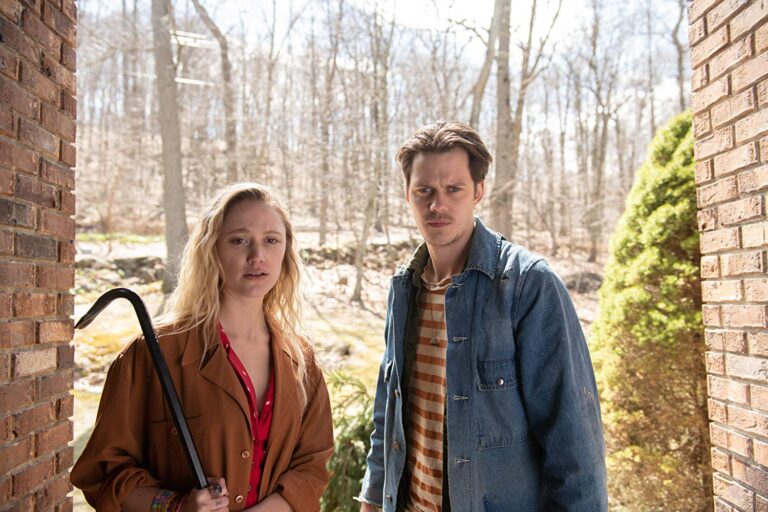 Mickey (Bill Skarsgard) and Jules (Maika Monroe) aren’t so different from other young couples in their mid-twenties: crazy in love and overflowing with libido, with heads full of dreams about spending their future together on the Florida coast. Sure, they’re also toting around a bowling bag stuffed with cash and drugs and are wanted for a string of armed robberies, but every couple has their issues.

When their car breaks down in the middle of the woods — ironically, while knocking over the latest gas station and emptying the register, it never occurred to them to fill the tank — Mickey and Jules stumble upon a well-kept home in the otherwise secluded forest. The residents appear to be nowhere in sight, and the car parked in the garage seems like the perfect getaway vehicle, but the keys are nowhere to be found. A subsequent search of the premises turns up multiple surprises, not the least of which is a dirty and disheveled little girl chained up in the basement.

Enter George (Jeffrey Donovan) and Gloria (Kyra Sedgwick), whose wardrobe and mannerisms suggest they’ve been spirited out of the 1950s — picture a Southern-fried Ward and June Cleaver, and you’re on the right track. As for the little girl? “That’s our Sweetie-Pie,” George explains, as if that settles the matter altogether. Quick as a flash, the tables have turned and it’s Mickey and Jules now being held at gunpoint — and that’s when Villains kicks into high gear.

Directors Dan Berk and Robert Olsen have crafted a ferociously funny comedy-thriller, thumbing their nose at convention and frequently pulling the rug out from under the characters and the audience in equal measure. In most films, our bumbling criminals would be in for some run-of-the-mill torture, but as George confesses, “as you get older, things get complicated.” And to that end, he and Gloria have something quite different in mind for the half-baked home invaders — particularly where Mickey is concerned.

The cast of Villains is superb all around, but Donovan steals the show as the polite Southern gentleman with a nasty mean streak lurking just below the warm smile and friendly handshake. Not to be outdone, Skarsgard distances himself from the sort of creepy characters that have become his trademark, eliciting huge laughs with his wildly manic performance, and Sedgwick imbues her prim housewife with an undercurrent of smoldering sexuality.

Well-received on the festival circuit, Villains should be a perfect match for midnight movie fans and audiences looking for an alternative to killer clowns, astronauts and sexy crime capers.