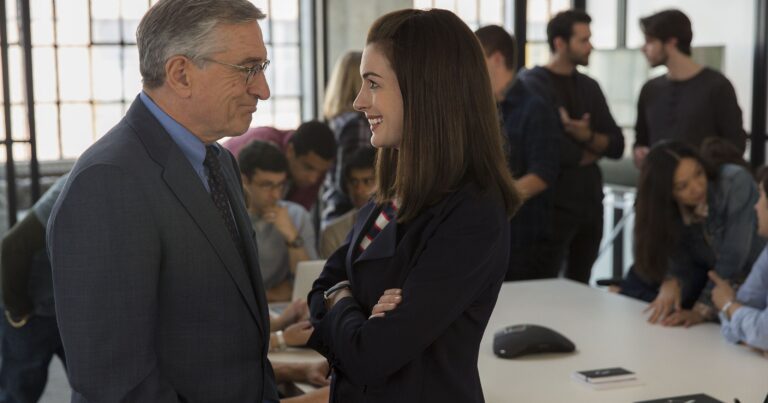 The Intern is a romantic comedy that refreshingly puts emphasis on friendship over romance. The film is still formulaic and predictable – after all, it’s a Nancy Meyers production – but at the same time, The Intern is pleasant, sweet, and offers some endearing performances from two immensely appealing actors. The fact that we don’t have to sit through any love triangles or will they/won’t they tension is an added bonus.

Robert De Niro gives one of his most likable performances as Ben, a 70-year-old who’s retired, widowed, and bored to death. Sick of keeping himself occupied through traveling and hobbies, Ben decides that he wants to go back to work. He applies to a senior intern program for an online fashion site and finds himself reporting directly to the CEO, a determined young career woman named Jules (Anne Hathaway). Jules seems to have it all as she runs a major company while simultaneously raising an adorable daughter with her loving husband. As Ben’s relationship with Jules becomes more personal than professional, however, he finds that she’s having a much harder time keeping everything together.

The Intern frequently makes commentary on Generation X vs. Generation Y, as we see how Ben differs from his much younger co-workers. Where he insists on wearing a suit to work everyday, the millennials dress casual with t-shirts and sweaters. There are a few really well-written moments that demonstrate the potential for a great film about this generation gap. For the most part, though, Meyers goes the sitcom route as Ben and his new hipster buddies get into wacky shenanigans. You know, like breaking into a house to delete an angry email.

While that’s kind of a missed opportunity, Meyers’ screenplay truly shines whenever the focus stays on Ben and Jules. Their rapport is sincere, charming, and fortunately never evolves into a love story. It’s a mentor/mentee relationship where the mentor is ironically the intern. At the same time, Jules teaches Ben plenty about our changing world in the workplace and at home. De Niro and Hathaway share a marvelous, natural chemistry together, forming a mutual bond that encompasses the best aspects of yesterday’s businessman and today’s businesswoman.

The Intern is given numerous opportunities to slip up. There’s a particular individual who does something pretty despicable in the third act. In another movie, this character would simply become the irredeemable villain. Yet, Meyers is a wise enough writer to realize that sometimes there are no bad guys in life. Sometimes people just make poor decisions under stressful circumstances. Although the film is largely grounded in a lighthearted sitcom universe, these people all feel human and are treated with respect. In the end, they just want to be happy and we want to see them happy too. That’s the key component of a feel-good movie such as this.

The Intern is formulaic and predictable - after all, it’s a Nancy Meyers production - but at the same time, the film is pleasant, sweet, and offers some endearing performances from two immensely appealing actors.