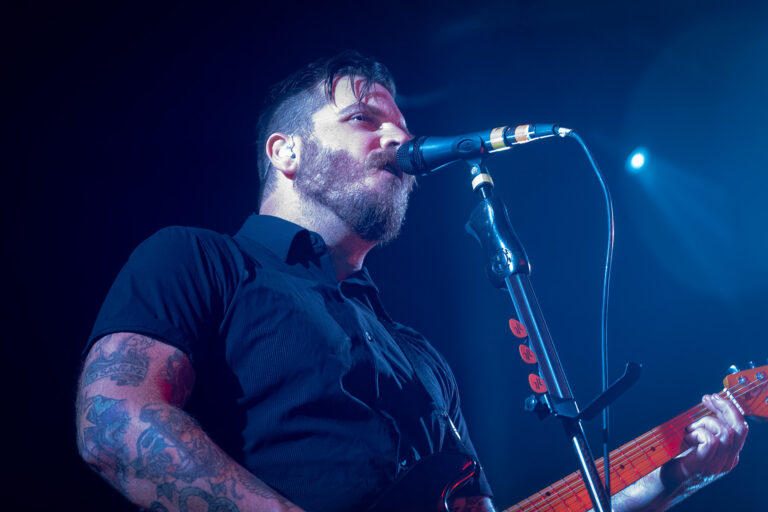 PORTLAND — The COVID-19 pandemic may not have been quelled yet, but mitigation measures like masks, social distancing and vaccines have paved the way for audiences to once again enjoy live music. Hot on the heels of their well-received 11th studio release, Horizons/East, rock veterans Thrice returned to the Rose City on Saturday for a performance at the Roseland Theater.

Kicking off with the new album’s solemn, introspective opening track “The Color of the Sky” before segueing into lead single “Scavengers,” the nearly 90-minute set was comprised largely of newer material, including six of the 10 songs from Horizons/East. Their beloved 2003 release The Artist in the Ambulance was represented only by its title track, and only two selections — “Of Dust and Nations” and live staple “The Earth Will Shake” — were pulled from 2005’s acclaimed Vheissu (although to be fair, the band’s last tour, to commemorate that album’s 15th anniversary, did feature the entire tracklist). Fans hoping for a setlist covering the band’s extensive repertoire might have been disappointed, but for anyone eager to check out live version of the new stuff for the very first time, Thrice was more than happy to oblige.

Check out the gallery of Thrice photos from the band’s stop at the Roseland Theater below. The tour heads to the southwest for its final leg this week, with stops in San Diego, Phoenix and Anaheim. Tickets for remaining shows on Thrice’s 2021 fall tour are available at thrice.net.