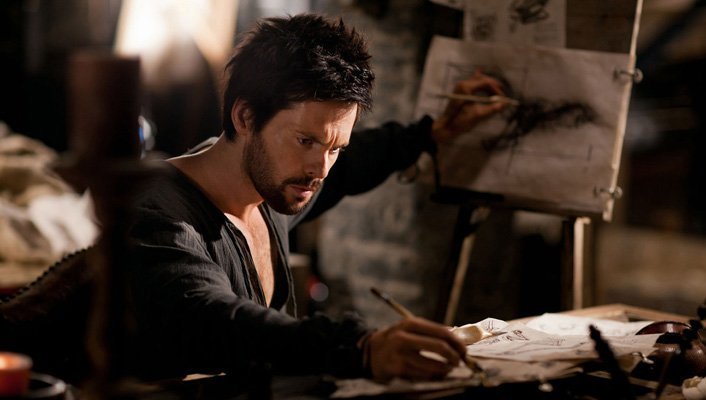 “Adventure, excitement… A Jedi craves not these things…”

These wise words from a tiny green creature on Dagobah echo through the annals of film history and apply themselves to many aspects of pop culture. Thankfully for the creators of Da Vinci’s Demons, a new Starz original series, I am not a Jedi. The first episode introduces us to a young Leonardo Da Vinci (Tom Riley) as he makes a name for himself as an inventor and artist, through an interesting and well-scripted pilot.

The show follows Leonardo as he manipulates and schemes his way into the local government of Florence, Italy. The stylized realism of the show is very reminiscent of another Starz hit series, Spartacus. You see the inner workings of Da Vinci’s mind as he invents new contraptions and then puts them to use, and in the process gains riches and Malcolm Reynolds-es his way into the arms of women.

The show so far has few outright flaws and where Spartacus has absolutely brutal scenes of Roman combat, Demons has a lot more panache and flair during its action segments. Leonardo, in many ways, has a certain charm to him that’s reminiscent of The Dread Pirate Roberts from The Princess Bride, both in his personality and his swashbuckling. The scenes where he is trying to invent a “flying machine” and the dialogue involved are whimsical and humorous.

The first episode sets up the possibility of future political plots that the title character doesn’t know he’s being sucked into, as well as hints toward possible portions of the show being devoted to the Illuminati. Overall, the show is a blast. I’d advise everyone with access to Starz take a crack at the show and try it out.