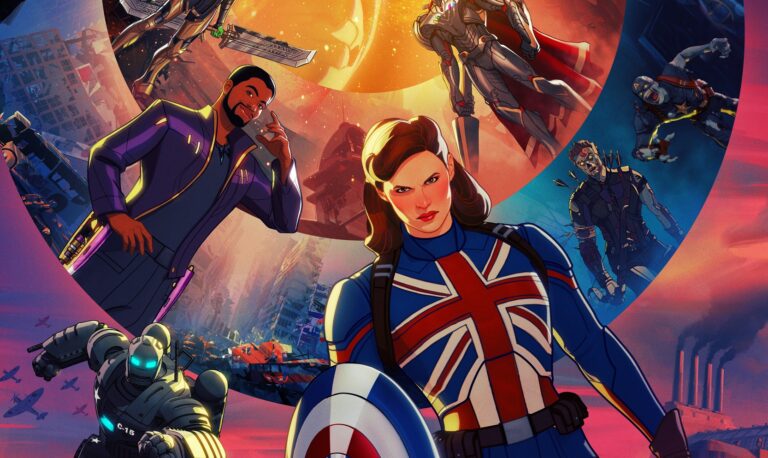 For the uninitiated, Marvel’s What If…? is an animated anthology series where every episode starts at a pivotal moment from the MCU films, but one change causes a butterfly effect that drastically alters the course of the story audiences remember. Growing up, the original short-lived run of Marvel’s What If…? comic book series was one of my absolute favorites, but few outside of hardcore comic fans were familiar with it. So kudos to Marvel Studios for reviving the franchise in this ingenious manner.

Jeffrey Wright voices The Watcher, the cosmic entity from the source material that acts as the narrator and multiverse guide, but can never get involved. It’s clear Wright is a phenomenal choice from the opening line and beyond as he conveys all the right power and emotional disconnection that character contains. The series even revives the source materials once an issue gimmick of showing the vague outline of The Watcher on the horizon – a great nod that creates some gorgeous vistas.

Episode 1 sees Hayley Atwell reprise her beloved role as Agent Peggy Carter, but the events of Captain America: The First Avenger are sent askew when Carter has no choice but to take the super soldier serum meant for Steve Rogers. The setup here is a solid introduction to the What If…? storytelling model with its twists and clever turns on the established Captain America MCU origin. Atwell is yet again wonderful and the voice cast also boasts everyone from Dominic Cooper to Stanley Tucci and beyond from Captain America: The First Avenger. Sadly, the one name missing from that list is the biggest one of all, Chris Evans.

From there, Disney+ gave us a look at the following two episodes, both featuring a whole new roster of MCU characters and voice actors. The second episode features a timeline where T’Challa aka Black Panther is taken by Yondu (Michael Rooker) instead of Peter Quill and the third episode features a massive scale story spanning movies from both Phase 1 & 2 of the MCU.

Chadwick Boseman returns one last time as T’Challa in the more heartfelt of the three episodes. This timeline mostly takes place in the Guardians of the Galaxy corner of the MCU and The Ravager team T’Challa acquires is full of big surprises and a bit of humor. Boseman’s portrayal of T’Challa as a swashbuckling, positive attitude role model is a blast and very different from the character we saw in Black Panther. The story is a sweet send off for Boseman as the story focuses on what it really takes to make a family and ends on a warm, positive note, sending Black Panther off into the sunset.

The last episode we got to see has by far the largest scale and the most purely entertaining of the trio. We won’t dare spoil any of it in this review, but we will say it starts with a focus on Black Widow (Lake Bell) and expands into a massive scale story with an enormous catalog of MCU characters and jaw-dropping turns at every corner. This type of clever, out of the box thinking makes What If…? such a great franchise premise with this episode displaying the perfect showcase of that type of chaos and excitement.

What If…?‘s animation style might be an issue for some people, as it uses an odd mix of cel animation that attempts to also be photo-realistic. Environments and vehicles look terrific and the action sequences really pop, but any time there is any kind of facial close-up for conversation purposes, it simply looks odd and poorly articulated.

Those not bothered by the animation should eat up every bit of this series after getting just a tiny taste of the MCU multiverse on Loki. The writing is imaginative and unpredictable with a great understanding of the worlds and characters within the franchise, and the voice cast is fantastic, aside from a few A-list no shows. As long as the MCU continues to expand, What If…? should always be the animated companion show to revisit these films in a whole different way.

Marvel Studios’ What If…? series premieres Wednesday, August 11 on Disney+.