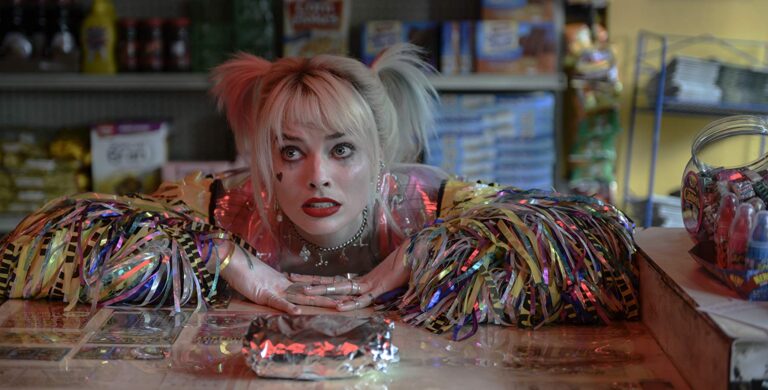 Warner Bros. got off to a shaky start with some of the early films in their DC Extended Universe: Batman v Superman: Dawn of Justice underperformed at the box office, Suicide Squad was savaged by critics, and Justice League achieved both of those accolades. But things have been looking up in recent years as the studio retooled their approach, stepping back from attempts to emulate Marvel’s intricate universe-building and focusing more on telling unique, mostly self-contained stories in Aquaman and Shazam. Now it’s Cathy Yan’s turn to carve out another niche with the girl-powered Birds of Prey.

Picking up sometime after the events of Suicide Squad, we find Harley Quinn (Margot Robbie) in the throes of post-breakup depression: she and The Joker are no longer an item, which the audience discovers via a brisk animated sequence at the top of the film. Harley is coping as best she can, joining a roller derby team as an outlet for pent-up aggression, spending her nights getting blackout drunk in various clubs around Gotham City, and causing no shortage of mayhem — for example, when the smug chauffeur of a feared crime boss insults her intelligence, Harley responds by breaking both of his legs and pouting, “I have a PhD, motherfucker.”

As paramour to Gotham’s most terrifying underworld figure, Harley has long enjoyed the freedom to do whatever the hell she wants without consequence, and to say that she’s the most hated woman in the city is no exaggeration. But when word gets out that she and Mister J are splitsville, she suddenly finds herself in dire straits as everyone she’s wronged comes out of the woodwork to hunt her down, forcing her to utilize every trick in the book to evade an onslaught of mercenaries and vengeance-seekers. Each of these would-be foes are introduced with on-screen captions and a brief voiceover from Harley, explaining their particular grievances in hilarious fashion, and the entire sequence is made all the more amusing by centering on the hungover Harley’s quest to consume a fried egg sandwich.

The plot of Birds of Prey becomes needlessly complicated as Harley runs afoul of the Black Mask himself, Roman Sionis (Ewan McGregor), whose sinister henchman Zsasz (Chris Messina) delights in using a scalpel to peel the faces from his victims. The events that lead to her teaming up with veteran detective Renee Montoya (Rosie Perez), ass-kicking lounge singer Black Canary (Jurnee Smollett-Bell), teenage pickpocket Cassandra Cain (Ella Jay Basco) and a crossbow-wielding assassin calling herself Huntress (Mary Elizabeth Winstead) are wildly convoluted, especially given the film’s non-linear structure, meant to echo Harley’s own scatterbrained approach to storytelling. This makes for a fairly messy first half, much of it requiring enormous leaps in logic, but things begin to gel once all the pieces are in place and Birds of Prey begins hurtling toward its zany third act.

Despite its title, the film is really the Harley Quinn show, and Robbie once again embodies the perfect balance of mischief, malaise and macabre that have long been staples of her comic book counterpart. But there’s also a surprising amount of depth to Harley this time around: in a drunken heart-to-heart with Canary, she explains the definition of a harlequin and confesses dismay at being on her own, and showcases a softer, more affectionate side of her personality via her devotion to her pet hyena, Bruce (“I named him after that hunky Wayne guy”), and her big-sister-like protection of Cassandra.

Robbie also shines in the film’s many action sequence, including a wild assault on a Gotham PD precinct, where she fires bean bags full of glitter and candy-colored smoke: it’s visually arresting, undeniably absurd and feels perfectly on brand for the character. Even more delightful is a climax that careens wildly off-kilter, taking place in a decrepit amusement park funhouse where a roller-skating Harley bounces on trampolines, somersaulting through the air and smashing thugs with an oversized mallet. But even in its ridiculousness, Yan finds time for brilliant little character moments, like Harley pausing the pummeling long enough to hand Canary a hair tie, or the gang stopping to marvel at Huntress’ lethality (“you’re so cool!” Harley squeals).

Birds of Prey might be driven by girl power, but McGregor deserves tremendous praise for his outlandishly eccentric portrayal of Sionis. Impeccably dressed in velvet suit jackets or silk robes, he seems hell-bent on stealing every scene he can, whether gleefully commanding his minions to carry out horrific acts of violence and becoming squeamish at the sight of blood, or showing off his collection of shrunken heads with childlike enthusiasm. Messina is also delightfully creepy as the dead-eyed assassin Zsasz, whose devotion to his boss hints at a relationship that goes beyond the employer/employee arrangement.

With its pop-infused soundtrack, brightly colored visuals and open-armed embrace of its R-rated sensibilities — F-bombs and bloodshed are dispensed in sizable portions throughout — Birds of Prey is another bold step in the right direction for the DC Extended Universe. Much like Aquaman and Shazam, it’s not without its share of issues in the plot and pacing departments, but the strengths far outweigh the shortcomings, and the future of the DCEU continues to look brighter with each new offering.